Over the past few years, Vietnam has become a hotspot in Southeast Asia in illegal hunting, captivation, transportation, and trafficking of wild animals and their products. It is also a major transit country in the region for wildlife product-trafficking networks. The consequences of wildlife trafficking include a decline of many wildlife species populations, extinction risk of many endangered species, and remarkably negative effects on biodiversity.

Statistics of the Supreme People’s Court showed that from 2015 to 2017, the court system accepted 231 cases with 339 defendants violating regulations on the protection of wildlife, and endangered, precious and rare animals. The Vietnam CITES Management Authority under the Ministry of Agriculture and Rural Development also stated that since 2014, law enforcement agencies have seized 28,728 kg of ivory, 478.84 kg of rhino horn and more than 15 tons of pangolin scales, many specimens of black corals, live turtles, snakes, tiger bones, maxima clam shells, timbers, and so forth. In 2018 alone, the Education for Nature Vietnam (ENV) recorded nearly 800 cases of wildlife-related violation in social media. The prevalent violations are advertising and promoting the illegal storage of wild animals, including many endangered, precious and rare species that are protected at the highest level under Vietnam’s and international laws, such as tigers, bears, slow lorises, and otters.

Vietnam has officially become a member of the Convention on International Trade in Endangered Species of Wild Fauna and Flora (CITES) since April 20, 1994, and the United Nations Convention against Transnational Organized Crime (UNTOC) since June 8, 2012. These crucial conventions recommend that member states should make effective use of mutual legal assistance (MLA) mechanisms in criminal matters, considering them important tools for investigation, prosecution and adjudication of transnational crimes, including wildlife-related crimes such as illegal hunting, trading in, and storing wildlife and endangered, precious and rare animals.

Showing serious commitments to the international community on wildlife protection, Vietnam has conducted a number of activities, demonstrating its determination to combat illegal hunting and trading of wildlife and endangered, precious and rare animals with a view to protecting them from extinction. With the constant improvement of the domestic legal framework serving as a basis for combating these crimes, Vietnam has taken various measures to raise the effectiveness of criminal proceedings to handle wildlife-related criminal cases. One of these measures is to enhance MLA in collecting information and documents, and verifying issues in wildlife-related criminal cases, especially those related to illegal trade and transportation of wildlife species and those involving non-Vietnamese citizens or across borders.

According to Article 493.2 of the 2015 Criminal Procedure Code, the Supreme People’s Procuracy (SPP) is the central authority of the Socialist Republic of Vietnam in MLA in criminal matters and other international cooperation activities. The SPP, with the Department of International Cooperation and Mututal Legal Assistance in Criminal Matters being the contact point, is authorized to receive and handle MLA requests in criminal matters from domestic proceeding-conducting agencies to foreign countries and from foreign competent agencies to Vietnam. In the process of handling wildlife-related criminal cases involving foreign elements, in order to collect information and documents or to verify relevant issues, the Vietnamese proceeding-conducting agencies may send a legal mandate (a written request) to foreign countries requesting legal assistance in collecting and verifying information and documents relating to the origin of evidence (wild animals or their products) and foreign legal entities (exporters or transporters of wildlife products to Vietnamese ports) involved in wildlife-related crimes.

Most of these requests were related to smuggling, illegal transportation of goods and cash across borders, and violations of the regulations on protection of endangered, precious and rare animals. While Vietnam’s MLA requests focused on information verification, evidence collection, and document service, foreign counterparts’ requests were related to joint investigation, bringing of witnesses to foreign countries to provide testimony at court hearings, and grant of permission for foreign investigators to enter Vietnam to conduct MLA activities. 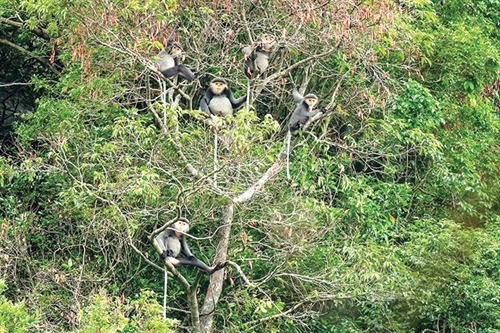 Grey-shanked doucs, one of the world’s 25 most endangered primates, in Kon PLong forest of Kon Tum province

Raising the effectiveness of MLA in wildlife-related cases

Though there are a few MLA requests related to wildlife criminal cases in recent years, accounting for only a small proportion of the total number of MLA requests in criminal matters in general, the response rate to MLA requests in criminal matters sent by the Vietnamese authorities remains low. Of the 15 requests sent by Vietnam to foreign authorities, only six have been implemented. The majority of these requests are related to wildlife-trafficking criminal cases involving African countries where illegal wildlife hunting and trading are prevalent. Regarding those requests sent to African countries (except some related to Mozambique), no response has been made. Meanwhile, according to Articles 148 and 229 of the 2015 Criminal Procedure Code, competent authorities will, upon the expiration of a law-prescribed time limit, suspend the processing of denunciations and reports on crimes and petitions for prosecution in case MLA requests from foreign countries involved in the cases have been made but to no avail. Similarly, when the law-prescribed time limit for conducting investigation into a criminal case involving foreign elements expires but competent agencies have not yet received any responses to the MLA request from foreign authorities, the investigation body will issue a decision to suspend the investigation of the case. Hence, the absence of responses to Vietnam’s MLA requests from foreign countries, especially African ones that are global hotspots in wildlife-related crimes, is likely to increase the number of suspended cases, affecting the legitimate rights and interests of affected individuals and organizations.

The above-mentioned situation can be attributed to the lack of treaties on MLA in criminal matters between Vietnam and African countries. To redress this problem, MLA activities among Vietnam and those countries may be carried out on the principle of reciprocity. The agency authorized to decide to apply this principle is the Consular Department under the Ministry of Foreign Affairs. In order to enter into cooperation based on the principle of reciprocity, MLA requests must be sent through diplomatic channels. However, compared to the submission of MLA requests directly to foreign countries’ MLA contact points, the sending of requests via diplomatic channels is more time-consuming. It is not to mention the difficulty in supplementing information, monitoring the progress, and urging the settlement of MLA requests.

Firstly, pending the negotiation and conclusion of MLA treaties with countries being Vietnam’s major partners in the fight against wildlife-related crimes, the SPP should coordinate closely with the Ministry of Foreign Affairs to speed up the process of sending and handling requests through diplomatic channels on the principle of reciprocity. Overseas Vietnamese diplomatic missions should actively contact foreign authorities to facilitate MLA activities. The Department of International Cooperation and Mutual Legal Assistance in Criminal Matters of the SPP and the Consular Department of the Ministry of Foreign Affairs should jointly hold briefing meetings on MLA activities once every three months. These briefing meetings will focus on reviewing MLA requests sent by Vietnam without any responses received and solving arising difficulties and obstacles so as to obtain grounds for investigation, prosecution and adjudication of wildlife-related criminal cases in the country.

Secondly, in the long term, it is necessary to promote the negotiation and conclusion of MLA agreements between Vietnam and other countries, especially African ones. As state-level documents with high degree of legal binding, such agreements will stipulate the rights and obligations of each contracting party and detail issues necessary for MLA such as the scope of MLA, grounds for refusal of MLA, and procedures for provision of MLA to ensure that MLA requests have sufficient information and could be effective. These agreements will also specify central authorities in charge of MLA in criminal matters of contracting parties and contact methods (address, phone number, email), thus facilitating the communication and exchange of information between competent authorities of contracting parties.

Thirdly, it is necessary to intensify cooperation and information exchange between the SPP and its foreign counterparts, attaching importance to the exchange of information before MLA requests are officially sent, thus restricting possibilities of lacking information and thereby reducing the risk of prolonging the handling of MLA requests. It is also a need to promote cooperation in training of judicial officers to enhance mutual understanding, build trust and facilitate collaboration.

In addition, Vietnam’s legal system on MLA should be further improved by formulating a separate law on MLA in criminal matters and expanding the scope of MLA to effectively support proceeding-conducting agencies.

In the coming years, against the backdrop of Vietnam’s international integration, it is foreseen that transnational organized crimes, including wildlife-related ones, will become more and more complicated with sophisticated tricks. Therefore, it is an urgent need to improve the effectiveness of MLA in criminal matters among countries, thus contributing to the protection of wildlife species from extinction, maintaining ecological balance and protecting the environment.